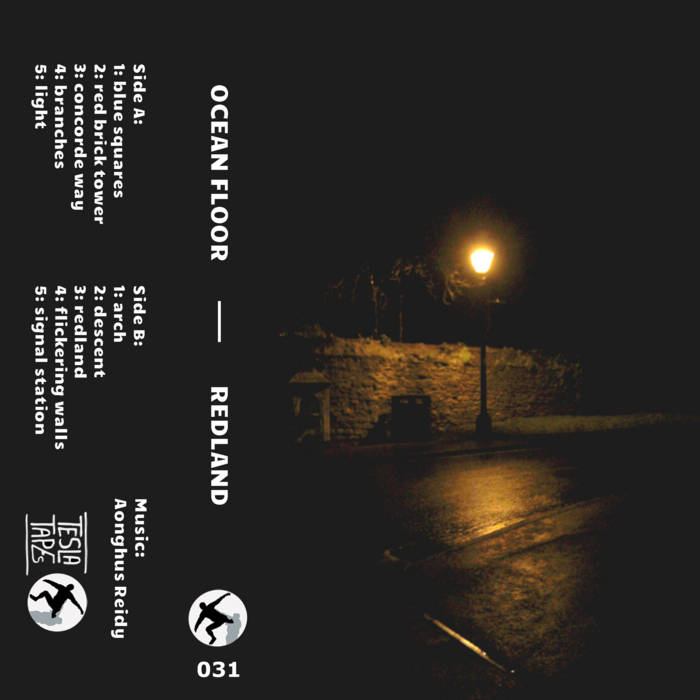 Tesla Tapes is absolutely delighted to be releasing this cassette, I've been a big fan of Aonghus Reidys music for a while now so this is a real treat.
Below are some words on Redland from the man himself ....

"My life has been a simple enough one in many respects, as only one important thing has ever happened to me.
Since that is the only thing worth recalling, I can skip past much of what came before, and what comes after is yet to be determined and thus irrelevant.
It happened one day that I spotted an aperture in the ground and took it upon myself to jump in. The aperture had neither weight nor measure but was compelling enough all the same. Were I asked what sort of colour or shape it might be, I would be at a loss for words. I had a distinct feeling that the aperture had a sort of a will of its own and was free to assume whatever boundaries it pleased. If I had to give a rough guess, I might describe it as a kind of intoxicating black fog that would bend the will of those who were foolish enough to look upon it. I might have continued walking, were it not the case that the aperture decided to pipe up at me.

"Ah sure hop in now, it'll do you no harm".
-Are you sure?
"Well, is there somewhere else you'd rather be?"
I had no answer to that one. Reaching the inside of this peculiar dimension I noted that there were no objects of any kind to be seen, yet I did not feel at liberty to move around as I pleased. The lack of obstacles was in itself a bigger obstacle than any I had previously known, binding me to my spot in interminable confusion.
Whole swathes of time played out in that fashion, a shapeless mass of sameness, an interminable fog of nothingness.

I relished this mediocre existence, for a while at least. I was seduced by the quiet certainty that comes when you step outside of the usual procession of events, the familiar march of weeks and years. I could have stayed like that forever, but it was in my nature to become dissatisfied with my own contentment. After an indeterminate length of time, I spoke into the shapeless void.

At that point, a perfect Ionic column appeared directly in front of me. It was about seven feet tall.

A faint whir came sailing above me, a bit like an air conditioner. It flew past the front of my face and settled on top of the column.

"Take a good look at this while you're at it".

Indeed I did take a good look at it. It was the neck of a fiddle attached to a plaster bust of Socrates.

"Don't forget that I can hear you think in here too. I know you think I just attached the neck of a fiddle to a plaster bust of Socrates but that's only the half of it".

Again the ghostly whir. The instrument flew into my hands and I played a slow lament on its strings. I could have stayed there for quite some time admiring the beauty of its tone, but my curiosity got the better of me and I decided to pinch its nose. I couldn't have anticipated the yelp that this heavenly fiddle would give back at me.
"Don't be at that".
I was surprised to hear the bust of Socrates rebuking me in such a fashion.
-Ah sure it was only a pinch.
"I'll tell you what it was".
-Grand so. What am I meant to do now?
"Take me back to where you come from. Though I should warn you that you don't come from the same place you used to. I can open the aperture back up wherever I feel like. I can't say where you might be next".
-But I'd feel a bit funny carrying a thing like this around with me.
"You think I give a fuck? Figure something out. I can vomit out beauty from the land of pure aesthetics and move from the unreal to the real without shattering in two like most other instruments of a similar design. You need me more than you might think".
-I suppose you could be handy enough to have around the place.
"I'm handy at a lot of things. You'll find out soon enough".

I turned around to leave, fiddle in hand, when the column spoke to me once more.

"I'd better mention something before you go. You will go through three trials upon your exit from this aperture. You can set them to music if you like".
-Yes.
"Very well.
The first and perhaps most difficult trial is the sighing of chimneys. You will pass by a chimney, and you will distinctly hear it sighing in desperation.
It will be your job to climb onto a stranger's rooftop to access and console the chimney. This trial will be the hardest of all as it will fundamentally challenge your place in society. You will feel the judgement of those less sensitive to matters of aesthetics and the heart. If you are caught in the act by one of these individuals as you climb up their roof, offer up a few words of consolation and gratitude. Tell them their chimney seemed sad. They may forgive you. They may even express regret that they did not hear their chimney sigh before you did".

-I suppose I could do that. Tell me about the second trial.

"The second trial is the trial of not knowing what the third trial is".

-But how would I ever even know what the third trial is?

"You'll know it when it happens. Better say no more about that one. Oh, and another thing".

"If you set this experience to music, people will inevitably want to know all sorts of useless shite like where you're from and what pedals you use.
They'll refuse to believe the real story. Press on all the same".

I could hardly get the words out before this beguiling world vanished away from me. Vomited back out from the aperture, I found myself on the top of a hill, fiddle in arm, the bust of Socrates glowing under the full moon. There were clusters of chimneys as far as the eye could see, and I gazed upon them with enthusiasm and dread.
I saw a gentleman strolling past an amber streetlight and took it upon myself to ask him for guidance.

-What sort of a place would this be now?
"Redland".
-Redland?
"Yes, Redland".

I was encouraged by his indifference toward the peculiar fiddle I had tucked under my arm. Socrates remained tactful in his silence.
I wish he might have stayed that way for longer.
I carried him with me for several years after that. For all his unsurpassable knowledge of aesthetics, he was a bit of an ignorant bollocks of a man at times. Fine verse lived side by side with tiresome quarrelling and no victory was ever final. The trial of the sighing chimneys was easier than expected but the second trial had me stumped. And having a fiddle with the sentient bust of Socrates attached to it was not as much of a help as you might think. I was reluctant to seek his counsel on this one, as I was sure he would give me some sort of wearying lecture about self-reliance and I thought I'd spare him the effort. It took about six or seven years of frustrated perambulation to realise that he himself was acting out a symbolic representation of the third and final trial I'd been living with all this time, the struggle to reconcile the fineness of pure aesthetic dimensions with the crass demands of everyday life.

I have set down the facts as close as I remember them. I hope this story might clear up any confusion that would arise out of possible ambiguities or uncertainties in the music that I present to you. I managed to get about ten songs out of him and his fiddle before I had to set him down at the top of Redland Hill where he simply disappeared into a puff of pure aesthetics. He was an odd fellow, yet I look back on those difficult years with a perverse fondness. I am glad I have some record of it."