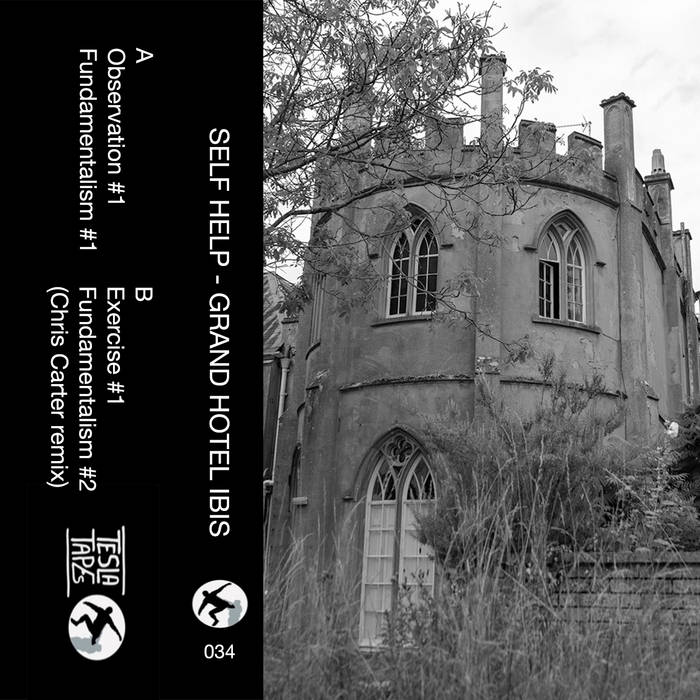 “Up until very recently this cassette was called Pam Ayres. There was artwork and everything. There was even a song (‘Theme From Pam Ayres’.) I was round at Jimmy The Saint’s flat and he was laughing at me, “What? You? You’re in a band? What do you sound like?” So, realising that he wouldn’t sell me any drugs until I humoured him, I described what Mark and I do and he laughed even more saying: “So you’re like the industrial, dub, post punk Pam Ayres?” One can dream, Jimmy The Saint, one can dream. We’re not there yet but this is the first decisive step on the road to New Jerusalem, a foot on the shining path to Pam Ayres.” - John Doran

"John assured me Self-Help was going to be an OMD covers band." - Mark Dicker

This is an album of electronic music played mainly on modular synthesizers by former Casio-abuser for Trencher and Palehorse member Mark Dicker. The words were written by former auxiliary Årabrot vocalist John Doran. The pair first collaborated on Doran’s Jolly Lad album in 2015 and have since become notorious for their breakneck pace of work, playing one gig approximately every 18 months since then, yet still finding time to produce this tape.

In 2015 Doran accidentally fell asleep onstage while performing with GNOD at Islington Mill and the following year he was hit by a car and knocked unconscious. During both events he had a tantalising glimpse of a rag tag eschatological movement with an ethos patched together from CBT pamphlets, half-remembered hypnotherapy tapes, York Notes on critical theory, YouTube TEDX Talks on Mindfulness; podcasts on giving up smoking, partially charred copies of Chicken Soup For The Soul, an incomplete dissertation on existential psychotherapy. In short, an imagined path out of Armaggeddon paved with the detritus of Self-Help and self-improvement.

While Dicker and Doran construct the robust Self-Help audio skeleton, they have received expert help adorning this framework along the way. ‘Observation #1’ features extra aqueous dub electronics from Chris Haslam of GNOD, not to mention saxophone from Chlöe Herington (VÄLVĒ) and Sam Barton (Teeth Of The Sea) on cornet. ‘Fundamentalism #1’ features Marion Andrau (Melting Hand) on vocals backed by a chorus made up of Sarah Bee, Tida Bradshaw (Body Vice), Lisa Lavery (Sweet Williams), Amy Mauvan and Natalie Sharp (Lone Taxidermist) and bagpipes by Michael York (The Utopia Strong, Teleplasmiste, Coil). And finally this track was then warped into ticket licking dub tyranny by Chris Carter of Throbbing Gristle.

For more information on Self-Help speak to John Doran on talktodoran@gmail.com or Paddy Shine on ingnodwetrust@hotmail.co.uk

10% of all physical and digital sales from all of Tesla Tapes available releases will go towards planting trees around the world. For the next 6 months Tesla will donate towards the Irish tree planting charity :
crann.ie

Now more than ever we need native woodlands planted across Europe.